Welcome to our World! Striving to be YOUR # 1 source of Online Entertainment! TV Shows, Movies, Music, Shippers and Fanfiction.

"Magic! Magic's all balderdash and chicanery. I'm afraid we don't know a bloody thing. Except I seem to be British, don't I? Uh, and a man. With... glasses. Well, that narrows it down considerably."
Post Reply
15 posts • Page 1 of 1

I have a lot.Mainly for the reason I was a huge Spike fan even back in Season Two when he was evil.

"What's this? Sittin' around watching the telly while there's evil still afoot? It's not very industrious of you. I say we go out there and kick a little demon ass! What, can't go without your Buffy, is that it? Let's find her! She is the chosen one, after all. Come on! Vampires! Grrr! Nasty! Let's annihilate them, for justice, and for... the safety of puppies... and Christmas, right? Let's fight that evil! Let's kill something! Oh, come on! "

"If every vampire who said he was at the Crucifixion was actually there it would've been like Woodstock. I was at Woodstock. I fed off a flower person and I spent six hours watching my hand move."

But my all around favorite was when Willow's spell wipped out their memory and Spike made the line how he must be a vampire with a soul whose fighting for good.I about cracked up on him saying he's what Angel is and everthing he hates most in the world.But when Buffy looked at him and said something like "Do you know how stupid that sounds?" I cracked up.LOL
Top

Mmm I will have to look when I have more time. Love Spike
Top

Spike is one of the main reasons why I looked forward to BTVS every week - and the only reason I gave Angel a chance (after season five, though, I went back and watched the first four seasons - not bad, but definitely better with Marsters onboard).
Top

I didn't mind S1 angel and I so watch the spin off show. But once there was Spike dreaming about Buffy that was me hooked on them as a couple.
Top

Yeah, I'm definitely a Spuffy shipper through and through

Ditto they had such a great chemistry on Buffy and the episode where they were all doing what Willow told them and the kissing and planning their wedding under a tree. Classic
Top

Oh god, those were some of the worst moments though

I mean, sappy-romantic just doesn't suit the two of them

No but I loved the urg kisses of spike

will look for some pics on days off.
Top

This makes my heart melt Aaaaand some more of Spike 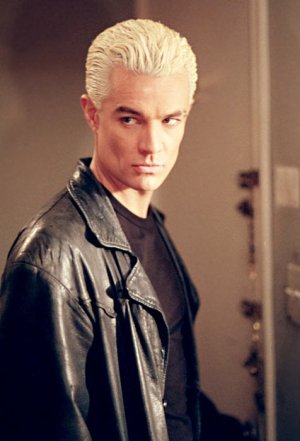